Editor’s Note: The United States has been at war for more than 200 of its 245 years of existence. Between the end of World War II and September 11 – barely 50 years ago – the United States sparked 201 conflicts that ravaged 153 countries and regions. “America: War by Another Name” is an eight-part special series that explores the sinister motivations behind its warmongering. Episode 7 is about the price the United States has to pay for its own military games.

The first is the upheaval in Afghanistan. After stationing troops in the country for 20 years, the United States hastily left and the Afghan Taliban returned to power. The world has witnessed the humiliation of a superpower by a small group of extremists.

The other is the return to China of Huawei’s chief financial officer, Meng Wanzhou. As a result of the Chinese government’s relentless efforts, Meng, who had been arbitrarily detained by Canada “at the behest of the United States” for over 1,000 days, finally returned home.

The two events, while seemingly independent, point to a reality we know only too well over the past decade: the United States reluctantly pressed the pause button in a war it waged unilaterally. whether it is a hot war involving bloodshed or a trade or technology war waged ostensibly for legal reasons.

They signal the fall of American unipolar hegemony and the end of an era in which the United States is the only superpower. It is disconcerting that although the United States has never achieved a real military victory since World War II, it has repeatedly sparked new conflicts. Why does the United States keep sliding down the war hole?

Reason number one: the United States was born of wars, rose through wars, and actively pursues wars. Since its founding, it has increased the size and capacity of its military forces, strengthened the structure and dimensions of the state apparatus, and broadened the scope and limits of state governance through various forms of wars. .

This bloody nation-building process accelerated the United States’ transformation from a federal republic to regional hegemony and, ultimately, to the world’s only superpower. It’s fair to say that wars are at the heart of America’s rise to global hegemony. Without the primitive accumulation of capital and the expansive impetus of wars, the United States would not be the country it is today.

It is America’s wars, both internal and external, that have compiled the country’s history in nation-building and global expansion. He not only defined how the United States exists today, but also locked the country into a system of self-sustaining warfare, so much so that American scholar Robert Kagan described the United States as a Bellicose “dangerous nation”. Former US President Jimmy Carter bluntly declared in a 2019 speech that America was “the most belligerent nation in world history.”

It was also wars and hegemony that betrayed the “fairy tale” that Americans have so painstakingly woven. As William J. Novak, a law professor at the University of Michigan, said, America’s elites have long tried to make the country’s history a fairy tale of controlled power and limited government, and a glorious one. on freedom and democracy, but in the meantime closed our eyes to the harsh reality of American interventions, impositions and invasions in the world.

In other words, by going in the opposite direction of its national imagination of a small government and its original democratic and liberal goals, the United States has turned into a country still at war. It attempts to export American-style “democracy” to the world as a universal model, and even overthrows governments of other countries in the name of democracy, resulting in countless humanitarian catastrophes. It only serves to remind the world that America’s national development and status as hegemony rests solely on wars and wars. 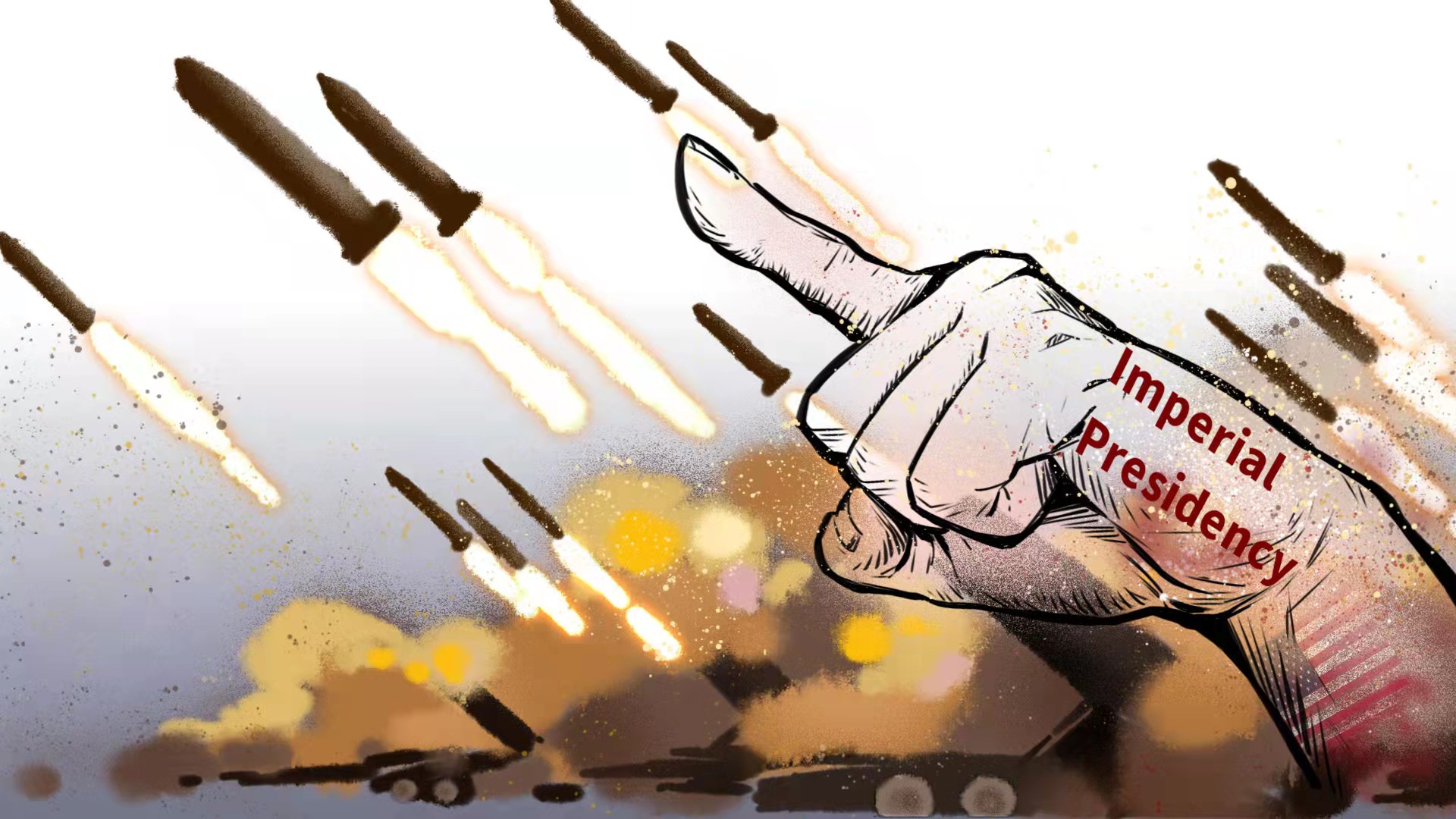 Reason 2: The American political system is controlled by politico-military interest groups motivated by war. The functioning of de facto political power in the United States depends on the maintenance of a state of war or emergency. Such a state justifies any binding action taken by the government and makes it easier for the president to bypass Congress and the Supreme Court and exercise power as he pleases.

The US Constitution gives the president the dominant power to make diplomatic and military decisions, and the privilege to break laws during a state of emergency. Over the past century, the US government has used crises, wars, and emergencies as an instrument to gain more power. The president and military-political interest groups have been the biggest beneficiaries.

During the process, the coordination between Congress and the Supreme Court with the President overcomes the checks and balances. Meanwhile, bitter partisan brawls do nothing to resolve crises, making the president and his military-political interest groups the ultimate troubleshooters and empowering them even more.

US scholar Arthur M. Schlesinger Jr. noted that the US president increasingly assumed the predominant political and military power, giving rise to one of the most salient political phenomena in the country today – the Imperial Presidency. The potential risk created by such unchecked and unbalanced power is of growing concern to Americans. 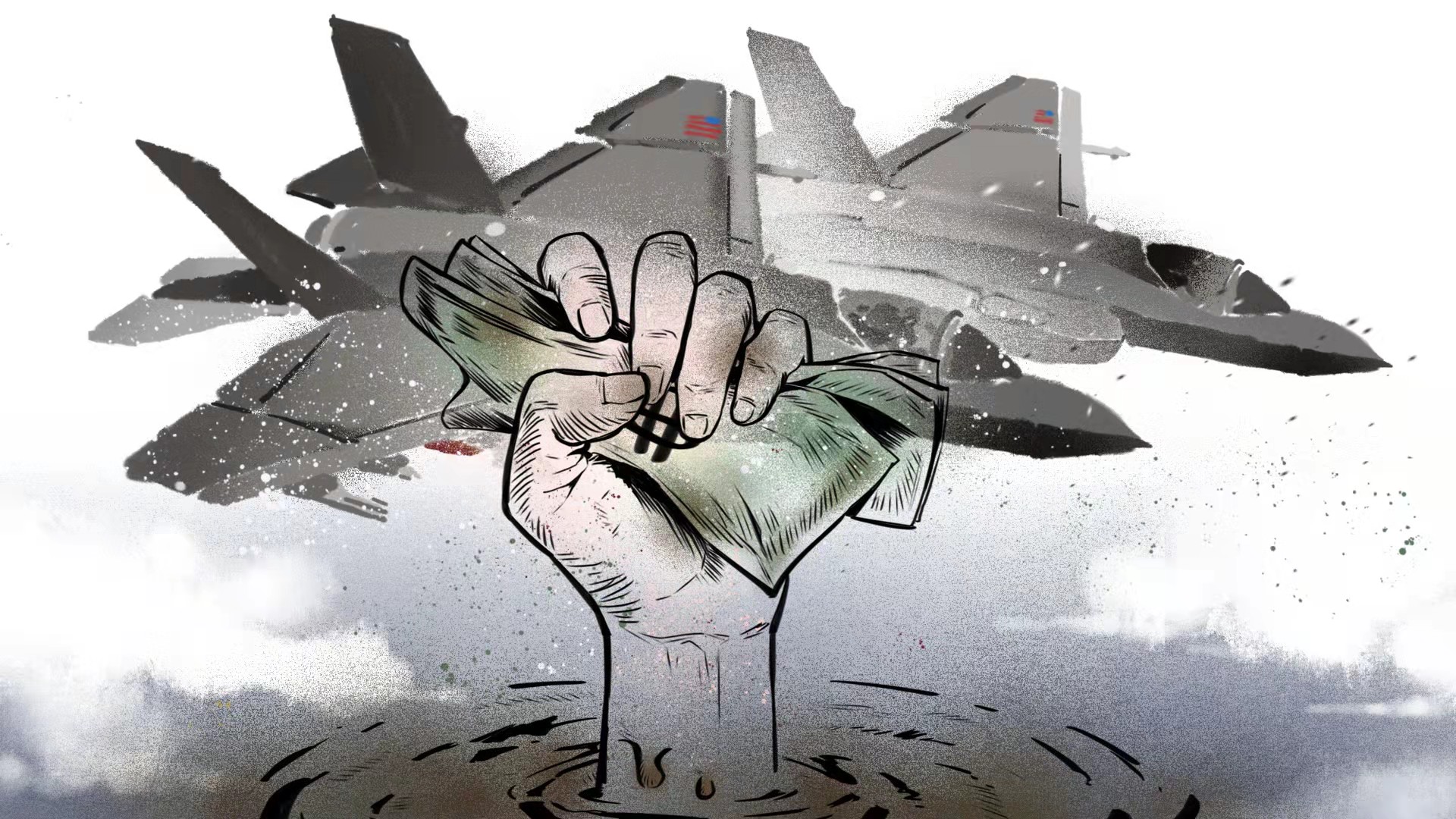 Third reason: the American economy is linked to the super tank of the military-industrial complex. Since the turn of the 20th century, a series of foreign wars have turned the country into a military power with the world’s largest equipment, the most advanced technologies, and the most influential defense contractors.

The colossal military industry is one of the main engines of U.S. economic growth, with its upstream and downstream industries contributing nearly 40% of the nation’s national GDP. It has also facilitated the rise of a gigantic interest group that spans the military, political, financial and academic sectors and often dictates domestic and foreign policies – the military-industrial complex.

In the meantime, the profits generated by the wars are monopolized by the big companies. According to the independent US think tank Security Policy Reform Institute, the top five US defense contractors – Lockheed Martin, Raytheon, General Dynamics, Boeing and Northrop Grumman – pocketed $ 2.02 trillion just for the war in Afghanistan. This is only a small portion of their profits over the past two decades.

Brown University estimated that military operations after the 9/11 attack cost U.S. taxpayers $ 6.4 trillion. Much of the money has gone to the five largest US defense companies, at the expense of investments in national public goods and jeopardizing the public welfare of Americans.

Such an unequal distribution of interests will not end as a result of anti-war protests. Instead, it will continue to tickle the profit-seeking desire of military-industrial enterprises, leaving the United States either mired in the quagmire of war or on the cusp of a new conflict.

A bellicose United States has conquered hegemony but lost the sense of its identity: it can still tell great stories, but it ends up betraying its own values. The foundations of the nation have been shaken. Other conflicts, social crises and even political decline will follow, as reality clashes with America’s political principles and social ideals.

American politics and economics are now tied to the tank. This means that the absence of wars and external stimuli will discourage the United States from integrating political and economic systems, dragging it further into the quagmire of political polarization and undermining the momentum for sustained national development. This is the price the United States must pay for its own military games, a reality from which there is no exit plan.